The Story of Glory Boats

Glory Boats owner Joel Schmidt was inspired by an unfortunate event in his family. His father John who at the age of seventy-four was still working as a self employed electrician took a nasty fall from a ladder while working on a construction site. Every rib on his left side and two on his right were broken. The pain was intense. 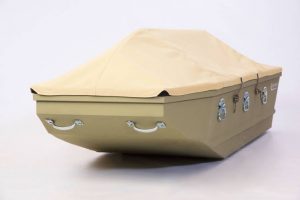 As his father lay in an emergency room treatment bed, Joel worried this could be the end for his dad. He also realized he had no idea what sort of funeral arrangements his father wanted and so began to ask about his plans. At one point during the conversation Joel offhandedly remarked how glad he was to know his dad’s wishes because “If you hadn’t told me what you wanted, I might have just buried you in your fishing boat”. 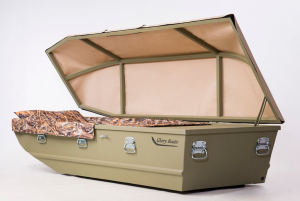 The statement stuck in Joel’s mind, took root and grew into an idea that resulted in the founding of Glory Boats, Incorporated. The company builds and supplies funeral caskets that are scaled down versions of the venerable aluminum Jon Boat. Glory Boats offer a way for lovers of outdoor sports to individualize the memorial celebration of their lives. 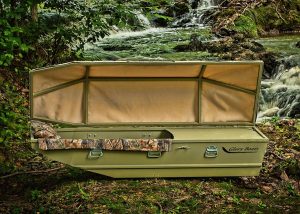 Glory Boats mission is to encourage everyone to plan their departure from this life. Men are often the least likely to plan their funerals, leaving their families with the burden of deciding just what dad might would have liked. Glory Boats get men to thinking and talking about the importance of planning their funeral to help ease the most difficult time that most families endure.

Fill out my online form.

© 2021 by Glory Boats. All rights reserved.
Website by Jackpot Interactive.